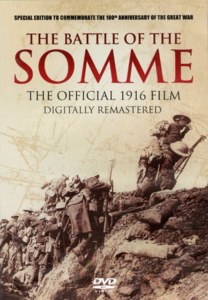 Battle of the Somme : The Official 1916 film
Digitally Remastered

Documentary account of World War One's Battle of the Somme, infamous as one of the bloodiest mistakes in the history of military conflict. 60,000 British soldiers fell on the first day alone, and a further 400,000 lives were lost - all in order to gain just six miles of territory.