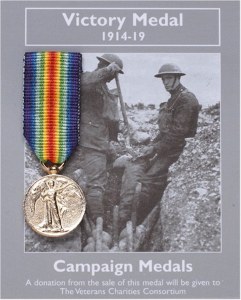 World war I (1914-18) was fought between the Allied Powers and the Central Powers. On the western front fighting was characterised by trench warfare where during an attack a few metres of ground were gained for an enormous cost in lives. Aerial warfare developed into bombing and air-toair combat. On November 11th an armistice was signed between Germany and the allies bringing the war to an end.

This reproduction Victory medal is made from 22ct golt plated lead-free pewter. It is supplied on a rainbow coloured ribbon attached to a card with an image of troops surrounded by motar bombs on the front and historical information on the reverse.

Flo Of The Somme

Why Do We Remember Remembrance Day