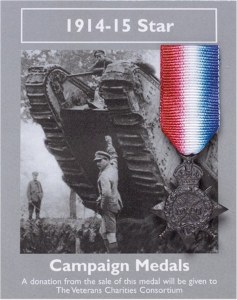 A miniature reproduction of the 1914-15 Star camapign medal awarded in the First World War and affectionately known as "Pip".

This medal was awarded to those who saw service in any theatre of war between 5th August 1914 and 31st December 1915, other than those who already qualified for the 1914 Star.

After the first Battle of Marne thousands of miles of parallel trenches were dug along the western front . Trench warfare was necessary because of the power, speed and accuracy of the weapons on both sides would have made it impossible to fight a battle in the open.

This reproduction 1914-15 Star medal is made from bronzed lead-free pewter. It is supplied on a red, white and blue ribbon attached to a card with an image of a British tank crossing a trench on the front and historical information on the reverse.