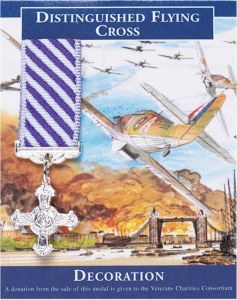 Established for officers and warrent officers of the RAF in respect of acts of valour while flying in active operations against the enemy. After the 1993 review of gallantry awards it was decided that this medal could be awarded to both officers and other ranks; the Distinguished Flying Medal having been discontinued.

Obverse - a cross flory terminating with a rose, surmounted by another cross made of propeller blades charged in the centre with a roundel within a laurel wreath. The horizontal arms bear wings and a crowned RAF monogram at the centre. Reverse - the royal cypher above the date 1918.

This reproduction Distinguished Flying Cross medal is made from silver plated lead-free pewter. It is supplied on a purple and white ribbon attached to a card with an image of Hurricanes attacking German bombers over London on the front and historical information on the reverse.