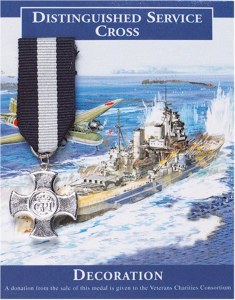 Known as the Conspicuous Service Cross when instituted, it was awarded to warrent and subordinated officers of the Royal Navy who were ineligible for the DSO. In October 1914 it was renamed the Distinguished Service Cross and thrown open to all naval officers below the rank of Lieutenant Commander. Bars for second awards were authorised in 1916 and in 1931 eligibility for the award was enlarged to include officers of the Merchant Navy. In 1940 Army and RAF officers serving aboard naval vessels also became eligible for the award.

This reproduction Distinguished Service Cross medal is made from silver plated lead-free pewter. It is supplied on a blue and white ribbon attached to a card with an image of HMS Prince of Wales and HMS Repulse under attack on the front and historical information on the reverse.