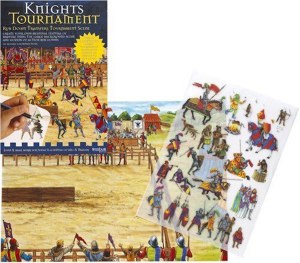 Tournaments provided a means for knights to practice warfare and build their strength in times of peace. These 'war games' consisted of individual contests (jousts) and group combat (melee). The most exciting event in the tournaments was the joust, where one knight would ride his horse at his opponent and would try to knock him off his horse with a blunted lance.

The Knight's Tournament Transfer Pack consists of an A4 card with a medieval tournament scene on the inside. There is a sheet of rub down transfers with 25 items on it. On the reverse there is a battle scene to colour in and historical information.

A Noble History of Knights

The History of William Marshal

The Knight Who Said No

Who? What? When? Knights & Castles