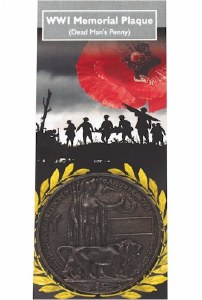 The Memorial Plaque was issued after the First World War to the next-of-kin of all British and Empire service personnel who were killed as a result of the war.

The plaques were cast in bronze, and came to be known as the "Dead Man’s Penny", because of the similarity in appearance to the much smaller penny coin 1,355,000 plaques were issued and continued to be issued into the 1930s to commemorate people who died as a consequence of the war.

A bronze plated World War I Memorial Plaque supplied with an information card.
The card describes how the Memorial Plaque was issued to the next-of-kin of all British and Empire service personnel who were killed during World War 1.
The original plaque had a 12cm diameter and was cast in bronze. This copy - diameter - 4.5cm
The front shows Britannia bestowing a laurel crown on a rectangular tablet bearing the full name of the dead in raised lettering.
Because of its appearance and its manufacture from a similar metal, it became known as "The Dead Man's Penny"

Flo Of The Somme

Why Do We Remember Remembrance Day