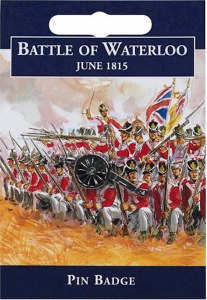 On the 18th June, 1815 at Waterloo near Brussels, the army of 72,000 French troops under Napoleon attacked the combined army under the Duke of Wellington, 68,000 troops and, later that day, the Prussian army under Marshal Blucher, 45,000 troops.Towards sunset, a last French attack failed and the French retreated. Napoleon ultimately surrendered to the British.

This pewter cannon is supplied on a pin with clasp. The information on the reverse of the card describes the Battle of Waterloo in 1815.