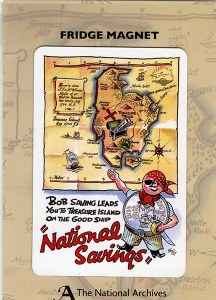 Flexible fridge magnet featuring a deisgn taken from a National Savings poster Bob Savings Leads You To Treasure Island. The image is one held in The National Archives.

The magnet is 8 x 12 cm cello wrapped and presented on a backing card.

In 1916, the government began to issue war bonds as a way of raising money. Since the First World War, National Savings campaigns have invited the public to invest in war bonds and related products. The result has been a range of attractive posters, often by the best commercial artists.

Various themes included appeals to patriotism, how money was being used in the war effort and visions of a better world once victory had been achieved.

Savings campaigns were launched within weeks of the declaration of war in 1939.
War savings posters appeared everywhere, from factory canteens to air raid shelters. They were also designed for particular groups, such as women war workers, who were encouraged to save for an idyllic post-war future with their husbands and children.

Over time, National Savings became a mass movement with thousands of groups in schools and workplaces where small amounts could be deposited. Among our images is a set of posters depicting the ‘Bob in the pound’ campaign.