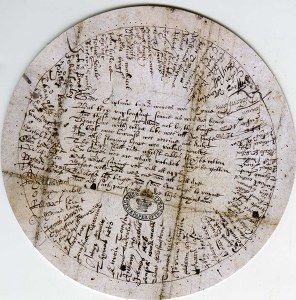 An unusual round postcard featuring an image of an early and rare example (circa 1627) of a sailor's round robin addressed to a Captain of one of the King's ships. A round robin was used to communicate grievances to higher authorities which could have been considered mutinous behaviour punishable by hanging. The format of the document allowed complainants to sign their names in a circular fashion therefore hiding the
identity of who signed the document first. In this instance the round robin bears 76 signatures with 12 lines of text in which the signatories refused to raise the anchor of their ship unless they received their
allowances and the ship was newly victualled. The original document featured on the paperweight is part of The National Archives collection.

Birds of The National Archives Postcards

The Ladybird Book of British History