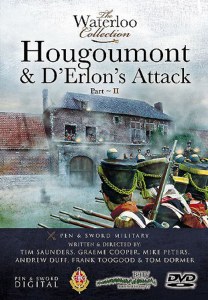 Hougoumont & D'Erlon's Attack is the second part in the explosive four part series, The Waterloo Collection, which covers the entire Waterloo Campaign from Napoleon's return to France and ensuing battles to his final pursuit and eventual surrender to the British.

Following on from Ligny and Quatre Bras, Part II starts by focusing on the concentration of the Allies on the ridge of Mont St Jean and the plans of the opposing armies. While the guns of the Grand Battery thundered in the centre, French columns bore down on the Hougoumont chateau and farm complex, which protected Wellington's flank held by the Guards and their German allies. Thus began an epic 'battle within a battle' that sucked away valuable troops from Napoleon's main attack, causing Wellington to declare that 'the battle turned on the closing of the gates at Hougoumont'.

Meanwhile, with drums beating and Eagles to the fore, D'Erlons Corps attempted to bludgeon its way through Wellington's centre, not knowing that the British and Dutch line was in waiting on the reverse slope. Upon seeing the French advance, the British released a disciplined volley of musket fire that checked the French. A further brilliantly timed charge by the Household and Union Cavalry Brigades finally saw the French off. Analysed in detail using the latest historical sources, the team provide a fresh slant on this phase of the battle.

The film was shot on location on the very field of Waterloo where the terrible events of this most iconic of battles took place. Brought to life with re-enactment on the battlefield by the regiments of the Napoleonic Society and leading authorities on the battle, Hougoumont & D'Erlon's Attack is a must for any student of warfare.