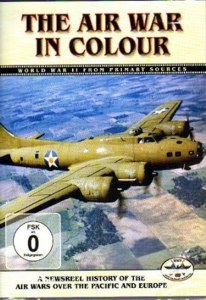 The Air War in Colour DVD

A newsreel history of aerial combat over the Pacific and Europe. This was an Academy Award winning documentary produced in 1944 by the US War Department and the US Naval Communication service.

The Air War in Colour is a collection of two award- winning documentaries produced by the US War Department.

The first of these documentaries, The Fighting Lady, won an Academy award in 1944 when it was released. The Fighting Lady tells the story of an aircraft carrier at sea in the Pacific theatre during world war II. It builds a very real picture of life at sea, these aircraft carriers were more than just war machines, they were home for many men and these boats provided communities with pharmacists, postal workers, doctors, cooks and cleaners.

When the carrier goes in to action, all of these workers who form a community become key crew in the fight against the Japanese, they become gunners, spotters and deck hands. They support the pilots and their planes as they attack Marcus islands, Truk, and take an emphatic victory against the Japanese air force in the Marianas, which came to be known as the 'turkey shoot'.

Memphis Belle is the Oscar-winning tale of the final flight made by the famous B-17 bomber and her crew. Despite the joy that surrounds the story of a crew completing their 25 missions in enemy territory, it remains true to the loss of war that these men faced on a daily basis. This film also gives insight into how these missions are planned and how they interconnect with other bombing missions and even use decoys. Memphis Belle managed her final flight but not all the crews made it back that day.