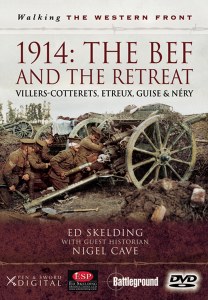 Walking the Western Front 1914 : The BEF and the Retreat

Filmed on location at the key locations of the opening Battles of the First World War and analyses some of the key battles and events at First Ypres.

Designed as a companion to the best selling Battleground series of books by Pen and Sword.

Filmed by acclaimed film-maker Ed Skelding, whose expertise in the field and strong Great War knowledge compliment the film.

Also presented by guest historian Nigel Cave, the series editor of the Battleground series of books and prolific Pen and Sword author.