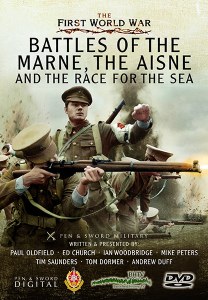 Battles of the Marne, The Aisne and the Race For the Sea DVD

Battles of The Marne, Aisne And The Race For The Sea DVD

While the Allied Generals were nearing panic as the Germans approached Paris, Marshal Foch quickly realised the German intent and that the Schlieffen plan was unravelling. In a master piece of military diplomacy he persuaded Filed Marshal French to join the Attack on the exposed flank of the Germans as it wheeled to the east of Paris. The battle was monumental and indeed a miracle, with the British playing a key part alongside the French in halting the German advance and driving them back behind the next river – The Aisne. Here, the next Allied attack crossed the river and up onto the open ridges of the Chemin des Dames. The Germans held them and Field Marshal French ordered them to dig-in as a temporary measure but the line moved but little here in the next four years.

With neither army able to make headway against modern small arms, the machine gun or quick firing artillery in a conventional frontal battle, the armies raced to redeploy into the uncontested ground north to the sea. Here on the La Basse canal and north to Armentieres and the Belgian city of Ypres both the Germans and the BEF attempted to advance but the result was a four hundred mile line of trenches from the Swiss frontier to the North Sea.