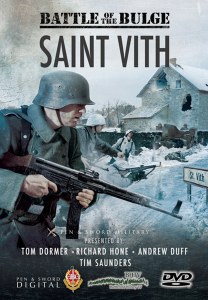 Saint Vith : Battle of the Bulge

The Northern most thrust into the wintery Ardennes of General Hasso von Manteuffel's Fifth Panzer Army fell on the inexperienced 105th US Infantry Division, who had not only just arrived in the European Theatre of War but had only been in the line for five days, in what was supposed to be a 'ghost front'. One of the best German infantry divisions reformed as the 18th Volksgrenadiers fell on the over extended Golden Lions dug in on the Schnee Eifel, where two US regiments were surrounded and forced to surrender.

Major General Jones was unable to stem what became a general bugout but, as in all retreats, both the best and the worst of human nature was on display. Small groups of officers and men fought on repeatedly, delaying the German panzer spearheads on the road to St Vith and buying time for elements of 7th US Armoured Division to arrive. After a desperate fight, Field Marshal Montgomery controversially took over the Northern shoulder of the Bulge and ordered 7th Armoured Division and the remnants of the 105th to abandon St Vith as 82nd Airborne Division had trucked from near Reims to contain the panzers and defeat their drive to the River Meuse.

Shot in the same deep winter snow as the battle was fought in, the BHTV team not only take the viewer to the scene of the action on Hitler's Siegfried Line but use maps, contemporary photographs and reenactment footage of the battle to give a sense of what it was like for commanders and soldiers of both sides to fight this most terrible of US Army battles.