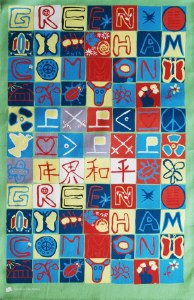 The Greenham Common Women's peace Camp was established to protest at nuclear weapons being sited at RAF Greenham Common in Berkshire, England. The camp began in September 1981 after a Welsh group, Women for life on Earth, arrived at Greenham to protest against the decision of the British government to allow cruise missiles to be based there. The first blockade of the base occurred in May 1982 with 250 women protesting, during which 34 arrests were made. The camp became well-known when on 1st April 1983 about 70,000 protesters formed a 14 mile human chain from Greenham to Aldermaston and the ordnance factory at Burghfield. The media attention prompted the creation of other peace camps at more than a dozen sites in Britain and elsewhere in Europe. Another encircling of the base occurred in December 1983 with 50,000 women attending. Sections of the fence were cut and there were hundreds of arrests. The camp was active for 19 years and disbanded in 2000. This tea towel is inspired by a collage peace sign erected next to the control tower at the base.

SPECIFICATIONS: Half Panama unbleached cotton (heavy weight, textured finish). Stitched on all four sides. Includes hanging loop. Measures approximately 48 x 70cm. Machine wash at 40 degrees max. We recommend that before you use your tea towel for the first time you wash it at least once to soften up the material and make it more absorbent for drying dishes. Please note size can vary slightly.

In Their Own Words: Volume 1