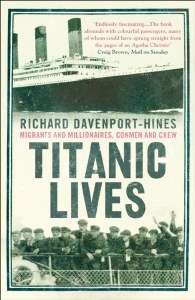 `Titanic Lives' is a fresh investigation of the lives of the passengers and crew on board the most famous ship in history.On the night of 14 April 1912, midway through her maiden voyage, the seemingly unsinkable Titanic hit an iceberg, sustaining a 300-feet gash as six compartments were wrenched open to the Atlantic Ocean. In little over two hours, the palatial liner nose-dived to the bottom of the sea. More than 1,500 people perished in the freezing waters.

But who were they?In this impeccably researched and utterly riveting social history, Richard Davenport-Hines brings to life the stories of the men who built and owned the Titanic, the crew who serviced her and the passengers of all classes who sailed on her. We are introduced to this fascinating cast of characters and follow their lives on board the ship through to the supreme dramatic climax of the disaster.

Ship Lost : The Fate of the Titanic Crew

Voyages From The Past