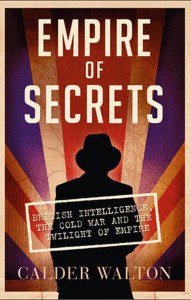 Empire of Secrets: British Intelligence, the Cold War and the Twilight of Empire

The gripping and largely untold story of the role of the intelligence services in Britain's retreat from empire. Against the background of the Cold War, and the looming spectre of Soviet-sponsored subversion in Britain's dwindling colonial possessions, the imperial intelligence service MI5 played a crucial but top secret role in passing power to newly independent national states across the globe. Mining recently declassified intelligence records, Calder Walton reveals this 'missing link' in Britain's post-war history.

He sheds new light on everything from violent counter-insurgencies fought by British forces in the jungles of Malaya and Kenya, to urban warfare campaigns conducted in Palestine and the Arabian Peninsula. Drawing on a wealth of previously classified documents, as well as hitherto overlooked personal papers, this is also the first book to draw on records from the Foreign Office's secret archive at Hanslope Park, which contains some of the darkest and most shameful secrets from the last days of Britain's empire. Packed with incidents straight out of a John le Carre novel, Empire of Secrets is an exhilarating read by an exciting new voice in intelligence history.