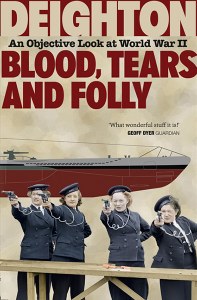 Drawing on the author's deep understanding of military life and the strengths and frailties of politicians and generals, this is a myth-puncturing analysis of the advent of the Second World War. 'Blood, Tears and Folly' offers a sweeping and compelling historical analysis of six theatres of war: the Battle of the Atlantic, Hitler's conquest of western Europe, the war in the Mediterranean, the battle for the skies, Operation Barbarossa and the German assault on Russia, and the entry of Japan into a truly global war. This is the period during which the Allied powers were brought to the very brink of defeat.

Deighton offers an unflinching account of the political machinations, the strategy and tactics, the weapons and the men on both sides who created a world of terror and millions of dead, of the Holocaust, and of nuclear devastation.