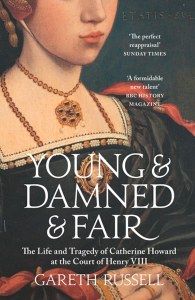 During one of the hottest summers on record the court of Henry VIII is embroiled, once again, in political scandal. The King’s marriage to Anne of Cleves has failed, his closest adviser Thomas Cromwell is to be executed for treason and, in the countryside, an aristocratic teenager named Catherine Howard prepares to become fifth wife to the increasingly irascible, unpredictable monarch.

Her story is both a very dark fairy tale and a gripping thriller. Born into nobility and married into the royal family, Catherine was attended every waking hour by servants and companions. Secrets were impossible to keep. Based on his research into Catherine’s household, Gareth Russell’s history unfurls as if in real time to explain how the queen’s career ended with one of the great scandals of Henry VIII’s reign.

More than a traditional biography, this is a very human tale of some terrible decisions made by a young woman, and of complex individuals attempting to survive in a dangerous hothouse where the odds were stacked against them. By illuminating Catherine’s entwined upstairs–downstairs worlds and bringing the reader into her daily milieu, the author retells her story in an exciting and engaging way that has surprisingly modern resonances.

Young and Damned and Fair is a riveting account of Catherine Howard’s tragic marriage to one of history’s most powerful rulers. It is a grand tale of the Henrician court in its twilight, a glittering but pernicious sunset during which the king’s unstable behaviour and his courtiers’ labyrinthine deceptions proved fatal to many, not just to Catherine Howard..