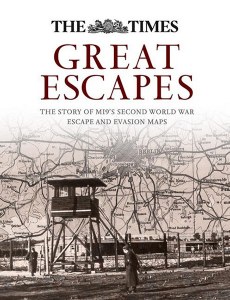 The definitive history of MI9's emergency escape and evasion mapping programme and the contribution the maps made to victory in 1945. Fascinating stories of secret maps used by prisoners of World War II. The creation of MI9 in December 1939, the rationale for the new military intelligence branch and the context of the history of military mapping on silk is outlined.

The maps were then copied and reproduced to support the escapes. Coded correspondence with the camps is discussed, and a successful deciphering of some of that correspondence is provided. The implications for the escape and evasion programme were considerable, but so too were the implications of the passage of intelligence from the camps to aid the war effort, a factor apparently largely overlooked.

Barbara A Bond gained a PhD degree from Plymouth University in 2014. The Great Escapes is a result of her doctoral degree and an interest in MI9 and its mapping programme. The author is well qualified to write on the subject of mapping, having spent her career as a map researcher with the Ministry of Defence and later as senior civilian Director and Deputy Chief Director in the UK Hydrographic Office. The Introduction states that the principle aim of the book is 'for the first time, to reconstruct, document and analyse the programme of escape and evasion mapping on which MI9 embarked'. The experience of many during the First World War had changed military thinking dramatically. From the disgrace of being a prisoner of war to actively working towards communicating and assisting their escape and indeed evading capture in the first place - this change in thinking helped in the creation of MI9 in 1939. Although the reader may know some of the facts, it is the detail provided that makes this book interesting. Such as the making and printing of the maps, the deciphering of the coded letters and the means used to send and receive both the letters and maps in the camps. The information covering the series: scale and coverage of the maps, and also the decoding of the letters might be bit daunting for some readers that do not have the background knowledge or interest in the subjects covered. The book is well presented with photos and maps on the majority of pages. The title along with the dust jacket, which shows a map overlaid with a watch tower and guards are clear reference to the contents and theme of the book. The appendices give valuable details of interest for the reader that would like to know more about mapping and decoding. There is a bibliography, index and also illustration and image credits. The book is well written and researched and covers many aspects involved in the creation and organisation of not only MI9, but also the Escape Committees in the prisoner of war camps. Jean Cheshire Friends of The National Archives http://nationalarchives.gov.uk/get-involved/friends.htm