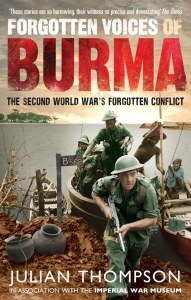 From the end of 1941 to 1945 a pivotal but often overlooked conflict was being fought in the South-East Asian Theatre of World War II the Burma Campaign.In 1941 the Allies fought in a disastrous retreat across Burma against the Japanese an enemy more prepared, better organised and more powerful than anyone had imagined. Yet in 1944, following key battles at Kohima and Imphal, and daring operations behind enemy lines by the Chindits, the Commonwealth army were back, retaking lost ground one bloody battle at a time. Fighting in dense jungle and open paddy field, this brutal campaign was the longest fought by the British Commonwealth in the Second World War. But the troops taking part were a forgotten army, and the story of their remarkable feats and their courage remains largely untold to this day.

The Fourteenth Army in Burma became one of the largest and most diverse armies of the Second World War. British, West African, Ghurkha and Indian regiments fought alongside one another and became comrades. In Forgotten Voices of Burma a remarkable new oral history taken from Imperial War Museum’s Sound Archive soldiers from both sides tell their stories of this epic conflict.