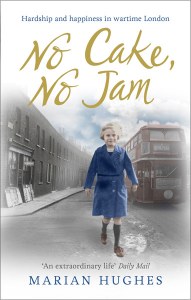 No Cake, No Jam : Hardship and Happiness in Wartime London

No Cake, No Jam is the heart-warming true story of a little girl's London childhood during the Blitz, and of how she rose above adversity through sheer guts and strength of character. Marian Hughes was born in the same year as her father committed suicide. She spent most of her early childhood with her elder sisters and brother in Spurgeon's Orphanage in South London.

There she learned to love extravagant hymns and to receive regular beatings. Suddenly, when Marian was ten, her mother appeared. All four children were swept up by their mother to live in a damp and filthy flat off Baker Street.

There began a life of moonlight flits, camping and squats. Marian's mother forgot to feed her children, and paid no attention to school or the bombing. Marian soon turned to begging and stealing to help the family get by.

Marian's brother and elder sisters left home as soon as they could, but Marian remained to support her deranged and frequently violent mother, evading Care and Protection Orders and often running away. Then the day finally came when Marian had to sign the papers to have her mother committed. From that moment, 14-year-old Marian had to find out if she was strong enough to live for herself...Throughout all the twists and turns of her childhood, Marian never lost her spirit and never faltered in her loyalty.

Full of vigour, truth, humour and curiosity, No Cake, No Jam is a passionate celebration of a life and love.