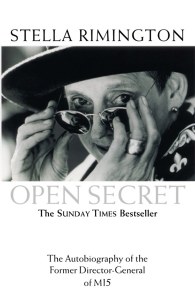 Open Secret : The Autobiography of the Former Director-General of MI5

Stella Rimington was educated at Nottingham Girls' High School, and Edinburgh and Liverpool Universities. In 1959 she started work in the Worcestershire County Archives, moving in 1962 to the India Office Library in London, as Assistant Keeper responsible for manuscripts relating to the period of the British rule in India. In 1965 she joined the Security Service (MI5) part-time, while she was in India accompanying her husband on a posting to the British High Commission in New Delhi.

On her return to the UK she joined MI5 as a full-time employee. During her career in MI5, which lasted from 1969 to 1996, Stella Rimington worked in all the main fields of the Service's responsibilities - counter-subversion, counter-espionage and counter-terrorism - and became successively Director of all three branches. She was appointed Director-General of MI5 in 1992.

She was the first woman to hold the post and the first Director-General whose name was publicly announced on appointment. During her time as DG she pursued a policy of greater openness for MI5, giving the 1994 Dimbleby Lecture on BBC TV and several other public lectures and publishing a booklet about the Service. She was made a Dame Commander of the Bath (DCB) in 1995 and has been awarded the Honorary Degree of Doctor of Laws by the Universities of Nottingham and Exeter.

Following her retirement from MI5 in 1996, she has become a Non-Executive Director of Marks & Spencer, BG Group plc and Whitehead Mann GKR. She is Chairman of the Institute of Cancer Research and a member of the Board of the Royal Marsden NHS Trust. She has two daughters and a granddaughter.