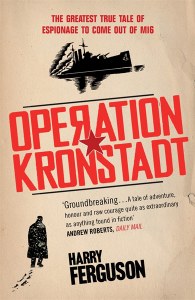 "Operation Kronstadt" not only reveals the early days of Britain's intelligence services but uncovers a truly dramatic story from the Russian Revolution involving a daring rescue attempt and a 'mission impossible' against the best defended naval target in Russia. By May 1919, when the power struggle between former Tsarists and Bolsheviks hangs in the balance, the only British agent in Russia is trapped and in mortal danger. Mansfield Cumming, the first 'C', dreams up an audacious - probably suicidal - plan to rescue him, and a young naval officer is sent with a specially selected team into the jaws of the Soviet fleet.

This is the remarkable story of the spy, Paul Dukes, (the only MI6 officer to be knighted for work in the field), and of Gus Agar, whose extraordinary escapade won him the Victoria Cross.