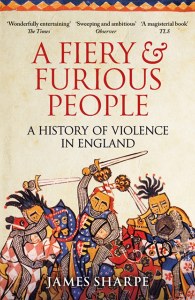 A Fiery And Furious People

A Fiery And Furious People

*Chosen as a Book of the Year by The Times, History Today and the Sunday Telegraph*`Wonderfully entertaining, comprehensive and astute.' The Times`Genuinely hard to put down.' BBC History MagazineFrom murder to duelling, highway robbery to mugging: the darker side of English life explored. Spanning some seven centuries, A Fiery & Furious People traces the subtle shifts that have taken place both in the nature of violence and in people's attitudes to it. How could football be regarded at one moment as a raucous pastime that should be banned, and the next as a respectable sport that should be encouraged? When did the serial killer first make an appearance? What gave rise to particular types of violent criminal - medieval outlaws, Victorian garrotters - and what made them dwindle and then vanish? Above all, Professor James Sharpe hones in on a single, fascinating question: has the country that has experienced so much turmoil naturally prone to violence or are we, in fact, becoming a gentler nation?`Wonderful .

. . A fascinating and rare example of a beautifully crafted scholarly work.' Times Higher Education`Sweeping and ambitious .

. . A humane and clear-eyed guide to a series of intractable and timely questions.' Observer`Deeply researched, thoughtfully considered and vividly written .