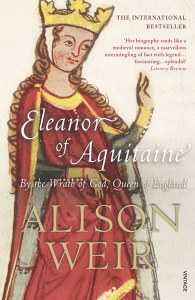 Eleanor Of Aquitaine : By Wrath of God Queen of England

Eleanor, Duchess of Aquitaine was one of the leading personalities of the Middle Ages, and also one of the most controversial. Having inherited a vast feudal domain stretching from the Loire to the Pyrenees, she was one of the greatest heiresses in history; yet in her own day, she was famous not only for who she was, but also for what she did. In an age when women were treated as mere chattels, she made her own choices, wielded power and won widespread respect.

Circumstances, however, dictated that her memory would be sullied by calumny and misunderstanding. Eleanor was no saint. She was beautiful, intelligent and wilful, and in her lifetime there were rumours about her that were not without substance.Her contemporaries were sometimes scandalised by her behaviour.

She had been reared in a relaxed and licentious court where the arts of the troubadours flourished, and was even said to have presided over the fabled Courts of Love. Eleanor married in turn Louis VII of France and Henry II of England, and was the mother of Richard the Lionheart and King John. She lived to be 82, but it was only in old age that she triumphed over the adversities and tragedies of her earlier years and became virtual ruler of England.

Eleanor has exerted a fascination over writers and biographers for 800 years, but the prevailing myths and legends that attach to her name still tend to obscure the truth. By careful research, Alison Weir has produced a vivid biography with a fresh and provocative perspective on this extraordinary woman.