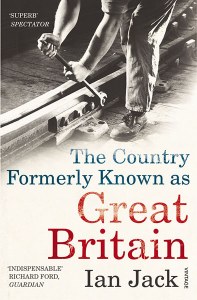 In this selection from over twenty years of reporting and writing, Ian Jack sets out to deal with contemporary Britain - from national disasters to football matches to obesity - but is always drawn back in time, vexed by the question of what came first.

In 'Women and Children First', watching the film Titanic leads into an investigation into the legend of Wallace Henry Hartley, the famous band leader of the doomed liner, while 'The 12.10 to Leeds', a magnificent report on the Hatfield rail crash, begins its hunt for clues in the eighteenth century in the search for those responsible. Further afield, he finds vestiges of a vanished Britain in the Indian subcontinent, meeting characters like maverick English missionary and linguist William Carey, credited with importing India's first steam engine.

Full of the style, knowledge and intimacy that makes his work so special, this collection is the perfect introduction to the work of one of the country's finest writers.