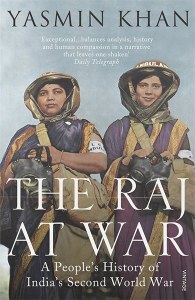 The Second World War was not fought by Britain alone. India produced the largest volunteer army in world history: over 2 million men. But, until now, there has never been a comprehensive account of India's turbulent home front and the nexus between warfare and India's society.

In The Raj at War we hear the myriad voices of ordinary Indian people, from the first Indian to win the Victoria Cross to the three soldiers imprisoned as 'traitors to the Raj' who returned to a hero's welcome, from the nurses in Indian General Hospitals to labourers and their families in remote villages. Yasmin Khan presents the overlooked history of India at war, and shows how mobilisation for the war unleashed seismic processes of economic, cultural and social change - decisively shaping the international war effort, the unravelling of the empire and India's own political trajectory.