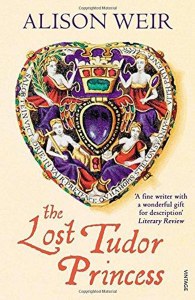 The Lost Tudor Princess : A Life of Margaret Douglas, Countess of Lennox

Royal Tudor blood ran in her veins. Some thought Margaret Douglas, Countess of Lennox, should be queen of England. She ranked high at the court of her uncle, Henry VIII, and was lady of honour to five of his wives.

Beautiful and tempestuous, she created scandal - twice - by falling in love with unsuitable men. Throughout her life her dynastic ties to two crowns proved hazardous. A born political intriguer, she was imprisoned in the Tower of London three times, once under sentence of death.

Her husband and son were brutally murdered, she warred with two queens, and proved instrumental in securing the Stuart succession to the throne of England for her grandson. Alison Weir brings Margaret Douglas' captivating character out of the shadows for the first time.