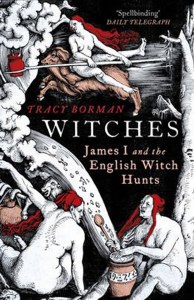 Witches: James I and the English Witch Hunts

In Belvoir Castle in September 1613, the heir of one of England's great noble families falls suddenly and dangerously ill. Within a few short weeks he will suffer an excruciating death. Soon the whole family will be stricken with the same terrifying symptoms.

This case is among those which constitute the European witch craze when suspected witches were burned, hanged, or tortured by the thousand. Like those, it is a tale of superstition, and, ultimately, injustice - a reminder of how paranoia and hysteria can create an environment in which nonconformism spells death. But as Tracy Borman reveals here, it is not quite typical.

The most powerful and Machiavellian figure of the Jacobean court had a vested interest in events at Belvoir. He would mastermind a conspiracy that has remained hidden for centuries.

The Oxford Illustrated History of Witchcraft and Magic