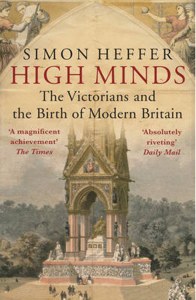 High Minds : The Victorians and the Birth of Modern Britain

Britain in the 1840s was a country wracked by poverty, unrest and uncertainty, where there were attempts to assassinate the Queen and her prime minister, and the ruling class lived in fear of riot and revolution. By the 1880s it was a confident nation of progress and prosperity, transformed not just by industrialisation but by new attitudes to politics, education, women and the working class.

That it should have changed so radically was very largely the work of an astonishingly dynamic and high-minded group of people - politicians and philanthropists, writers and thinkers - who in a matter of decades fundamentally remade the country, its institutions and its mindset, and laid the foundations for modern society. It traces the evolution of British democracy and shows how early laissez-faire attitudes to the lot of the less fortunate turned into campaigns to improve their lives and prospects. It analyses the birth of new attitudes to education, religion and science.

And it shows how even such aesthetic issues as taste in architecture were swept in to broader debates about the direction that the country should take. In the process, Simon Heffer looks at the lives and deeds of major politicians, from the devout and principled Gladstone to the unscrupulous Disraeli; at the intellectual arguments that raged among writers and thinkers such as Matthew Arnold, Thomas Carlyle, and Samuel Butler; and at the 'great projects' of the age, from the Great Exhibition to the Albert Memorial. Drawing heavily on previously unpublished documents, he offers a superbly nuanced insight into life in an extraordinary era, populated by extraordinary people - and how our forebears' pursuit of perfection gave birth to modern Britain.

Crime and Criminals of Victorian England