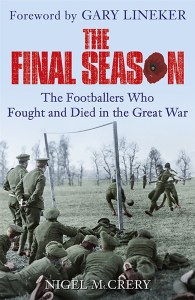 Final Season : The Footballers who Fought and Died in the Great War

A moving narrative history of the professional footballers who fought and died in World War I, with a foreword by Gary Lineker. In 1914, as today, successful footballers were heroes and role models. They were the sporting superstars of their time; symbols of youth, health and vigour.

Naturally enough, when war broke out they felt it was their duty to join up and fight. Between 1914 and 1918, 213 professional players fell in action. Some teams lost half their players, either killed or else so badly injured in mind and body that they were never to play again.

The Final Season is the powerfully moving account of these young men who swapped the turf of the pitch and the cheers of the fans for the freezing mud of the battlefield and the terrible scream of shell fire. It follows them as they leave their fans and families behind, undergo training and then travel on to the bloody arenas of war: Ypres, Gallipoli, the Somme, Passchendaele. Nigel McCrery paints these men in vivid detail.

From their achievements on the football pitch to their heroic conduct on the battlefield, we will learn of the selfless courage and determination they displayed in the face of adversity. For far too many, we will also learn when, and how, they made the ultimate sacrifice.