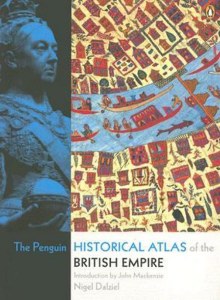 The Penguin Historical Atlas of the British Empire" traces the emergence of the world's greatest empire from its earliest beginnings in the British Isles, through its ascendancy in Victorian times, to its ultimate collapse in the mid-20th century. It examines the impact of British dominance in America, India and Africa, and the enormous changes brought by Britain's settlement of Australasia. It includes: coverage of major events the colonization of Ireland, the American Revolution, the South African wars is complemented by discussion of themes such as Imperial exploitation and trade, hunting for plants and animals, the Imperial exhibitions, and the importance of British naval power.

Also assessed are the impact of the Empire on different areas of the world and the legacy it has bestowed. Richly illustrated with photographs and full-colour maps, this is an illuminating and multi-faceted one-volume introduction to the rise and fall of the British Empire.