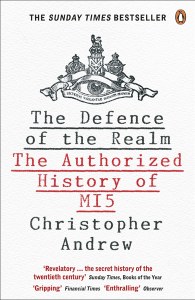 Defence Of The Realm : The Authorised History of MI5

To mark the centenary of its foundation, the British Security Service, MI5, has opened its archives to an independent historian. The Defence of the Realm, the book which results, is an unprecedented publication, It reveals the precise role of the Service in twentieth-century British history, from its foundation by Captain Kell of the British Army in October 1909 to root out 'the spies of the Kaiser' up to its present role in countering Islamic terrorism. It describes the distinctive ethos of MI5, how the organization has been managed, its relationship with the government, where it has triumphed and where it has failed. In all of this, no restriction has been placed on the judgements made by the author.

The book also reveals the identities of previously unknown enemies of the UK whose activities have been uncovered by the Service, adds significantly to our knowledge of many celebrated events and notorious individuals, and definitively lays to rest a number of persistent myths; above all, it shows the place of this previously extremely secretive organisation within the United Kingdom. Few books could make such an immediate and extraordinary increase to our understanding of British history over the past century.

MI5 originally stood for 'Military Intelligence [Department] 5'. The Secret Service Bureau (SSB) was formed in 1909 to counter the danger to Britain from German espionage, and the division of the SSB responsible for counter-espionage within the British Isles became Department 5, or ‘MI5’. MI5 was renamed the Security Service in 1931, but is still commonly known as MI5 today.

MI5's staff, headed by Director General Jonathan Evans, is largely based in their headquarters at Thames House in London. They also have eight regional offices around Great Britain plus a Northern Ireland headquarters. The Service is organized into seven branches, each with specific areas of responsibility, which work to counter a range of threats including terrorism, espionage and the proliferation of weapons of mass destruction.

There were a number of departments within the Directorate of Military Intelligence (MI1 through MI19) which dealt with a range of issues. For example, MI1 was responsible for code-breaking, and MI2 handled Russian and Scandinavian intelligence. The responsibilities of these departments were either discontinued or absorbed into The War Office, MI5 and MI6 and, later, the Government Communications Headquarters. What is the difference between MI5 and MI6? The Security Service (MI5) is the UK’s security intelligence agency, responsible for protecting the UK, its citizens and interests, at home and overseas, against the major threats to national security. The Secret Intelligence Service (MI6) is primarily responsible for gathering intelligence outside the UK in support of the government's security, defence, foreign and economic policies.

How realistic is the depiction of MI5 in the television series "Spooks"?
The BBC's "Spooks" is a slickly-produced and entertaining drama, but, like other works of spy fiction, it glamorizes the world of intelligence. The nature of MI5's work can be stimulating and highly rewarding (as the show's strapline declares, it is not "9 to 5"), but the programme does not portray the full range of their activities, nor the routine, but vitally important, aspects of their operations which would not make such exciting viewing. Particularly unrealistic is the way in which the characters in "Spooks" regularly act outside the law in pursuit of their investigations!

Christopher Andrew is Professor of Modern and Contemporary History and Chair of the Faculty of History at Cambridge University. He is also chair of the British Intelligence Study Group, Co-Editor of Intelligence and National Security, former Visiting Professor at Harvard, Toronto and the Australian National University, and a regular presenter of BBC Radio and TV documentaries. His thirteen previous books include The Mitrokhin Archive volumes 1 and 2, and a number of path-breaking studies on the use and abuse of secret intelligence in modern history.