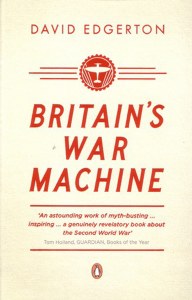 This title was selected for "Guardian" books of the year. The familiar image of the British in the Second World War is that of the plucky underdog taking on German might. David Edgerton's bold, compelling new history shows the conflict in a new light, with Britain as a very wealthy country, formidable in arms, ruthless in pursuit of its interests and sitting at the heart of a global production system.

The British, indeed Churchillian, vision of war and modernity was challenged by repeated defeat by less well equipped enemies. Yet the end result was a vindication of this vision. Like the United States, a powerful Britain won a cheap victory, while others paid a great price.

"Britain's War Machine", by putting resources, machines and experts at the heart of a global rather than merely imperial story, demolishes some of the most cherished myths about wartime Britain and gives us a very different and often unsettling picture of a great power in action.