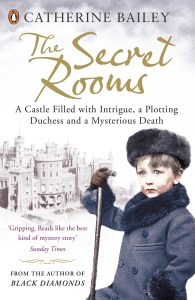 Secret Rooms : A Plotting Duchess, a Mysterious Death and a Castle Full of Intrigue The Secret Rooms

At 6 am on 21 April 1940 John the 9th Duke of Rutland, and one of Britain's wealthiest men, ended his days, virtually alone, lying on a makeshift bed in a dank cramped suite of rooms in the servants' quarters of his own home, Belvoir Castle, in Leicestershire. For weeks, as his health deteriorated, his family, his servants - even the King's doctor - pleaded with him to come out, but he refused.

After his death, his son and heir, Charles, the 10th Duke of Rutland, ordered that the rooms be locked up and they remained untouched for sixty years. What lay behind this extraordinary set of circumstances? For the first time, in The Secret Rooms, Catherine Bailey unravels a complex and compelling tale of love, honour and betrayal, played out in the grand salons of Britain's stately homes at the turn of the twentieth century, and on the battlefields of the Western Front. At its core is a secret so dark that it consumed the life of the man who fought to his death to keep it hidden.

Tracing Villains And Their Victims