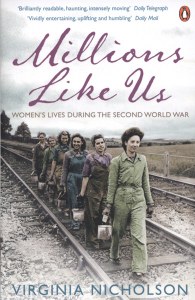 In the 1930s most women still expected to become wives and mothers. The war years took the inferiority myth and destroyed it, catapulting servants and mistresses alike into a world of life and death responsibilities.

From 1941, in an unprecedented move, women were conscripted (though not to combatant duty). Uprooted, these women were now launched into new lives in the WAAF, the WRNS, the ATS, the Land Army, the FANYs, the WVS. They became nurses, railway porters, code-breakers, motorbike despatch riders, lumberjills, fire-watchers, ambulance drivers, entertainers, welders and even pacifists. Emotionally, their lives were turned upside down by the effects of bereavement, the evacuation of children, homelessness, family break-ups, shotgun marriages, illegitimacy and divorce. But in conditions of Total Warmillions of women in the Services and on the Home Front - demonstrated that they were cleverer, more broad-minded and altogether more complex than anyone had ever guessed. Women emerged from the war transformed. A whole generation had awakened to their own potential. Deep down, they no longer bought the myth that women were inferior.

Then came peace. Within a year the number of married working women was down by almost a million and a half. The nation’s wives appeared to be retreating to the comfort zone of home and family. At the same time tensions ran high between soldiers expecting to return to their position as undisputed head of the family, and their wives, who might have spent the war years running the home as well as keeping down a job. By 1947 divorce figures were topping 60,000.

By 1951 the number of working women was back to pre-war levels, and the brief encounter with trauma, risk and independence seemed to have given way to traditional values: safety, domesticity, economy and restraint.

But the women who went back were changed for ever. The days of the Second World War had revolutionised their lives. Millions Like Us tracks women’s experiences of a momentous decade through a host of individual stories, drawing on autobiographies, archives and living memory. It tells of their pioneering contributions to our national story, of how they tried to re-make their world in peacetime, of how they loved, suffered, laughed, grieved and dared. And of how they would never be the same again.