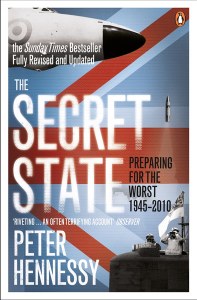 This updated edition of The Secret State revises Hennessy's picture of the Soviet threat that was presented to ministers from the last days of the Second World War to the 1960s. He maps the size and shape of the Cold War state built in response to that perceived threat, and traces the arguments successive generations of ministers, the military and civil servants have used to justify the British nuclear capability. He also adds new material exploring the threats presented by the IRA and radical Islamic terrorists post 9/11. In what circumstances would the Prime Minister authorize the use of nuclear force and how would his orders be carried out? What would the Queen be told and when? In this captivating new account, Peter Hennessy provides the best answers we have yet had to these questions.

How To Survive An Atomic Attack