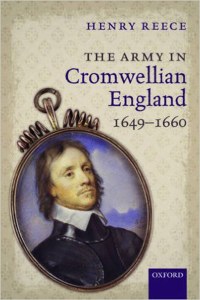 From 1649-1660 England was ruled by a standing army for the only time in its history. In The Army in Cromwellian England Henry Reece describes the nature of that experience for the first time, both for officers and soldiers, and for civilian society. The volume is structured in three parts.

The first section seeks to capture the experience of being a member of a peacetime standing army: its varying size, the reasons why men joined and remained in service, how long they served for, what officers and their men spent their time doing in peacetime, the criteria governing promotion, and the way in which officers and soldiers engaged with political issues as the army's role changed from the pressure-group politics of the late 1640s to the institutionalization of its power after 1653. The second part explores the impact of the military presence on civilian society by establishing where soldiers were quartered and garrisoned, how effectively and regularly they were paid, the material burden that they represented, the divisive effects on some major towns of the army's patronage of religious radicals, and the extensive involvement of army officers in the government of the localities, both before and after the brief appearance of Cromwell's Major-Generals. The final section pulls together the themes from the earlier parts of the book by re-evaluating the army's role in political events from Cromwell's death to the restoration of the Stuart monarchy; it describes how the issues of the rapidly-increasing size of the army, shortage of pay, civil-military clashes, and the exercise of military authority at local level contributed to the climate of disorder and uncertainty in 1659-1660; and delineates how and why the army that had occupied London, purged parliament, and executed Charles I in the late 1640s could acquiesce so passively in the restoration of the monarchy in 1659-1600.

Following in the Footsteps of Oliver Cromwell