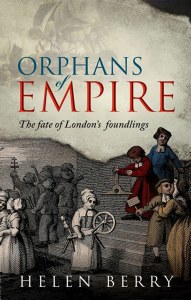 Orphans of Empire: The Fate of London's Foundlings

Eighteenth-century London was teeming with humanity, and poverty was never far from politeness. Legend has it that, on his daily commute through this thronging metropolis, Captain Thomas Coram witnessed one of the city's most shocking sights-the widespread abandonment of infant corpses by the roadside. He could have just passed by.

Instead, he devised a plan to create a charity that would care for these infants; one that was to have enormous consequences for childrenborn into poverty in Britain over the next two hundred years. Orphans of Empire tells the story of what happened to the thousands of children who were raised at the London Foundling Hospital.

Through the lives of London's foundlings, this book provides readers with a street-level insight into the wider global history of a period of monumental change in British history as the nation grew into the world's leading superpower.

My Ancestor Was A Bastard