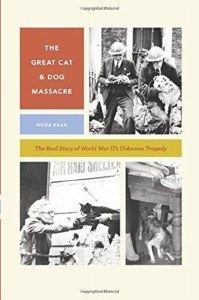 he tragedies of World War II are well known. But at least one has been forgotten: in September 1939, four hundred thousand cats and dogs were massacred in Britain. The government, vets, and animal charities all advised against this killing.

So why would thousands of British citizens line up to voluntarily euthanize household pets?In The Great Cat and Dog Massacre, Hilda Kean unearths the history, piecing together the compelling story of the life-and death-of Britain's wartime animal companions. She explains that fear of imminent Nazi bombing and the desire to do something to prepare for war led Britons to sew blackout curtains, dig up flower beds for vegetable patches, send their children away to the countryside-and kill the family pet, in theory sparing them the suffering of a bombing raid. Kean's narrative is gripping, unfolding through stories of shared experiences of bombing, food restrictions, sheltering, and mutual support.

Soon pets became key to the war effort, providing emotional assistance and helping people to survive-a contribution for which the animals gained government recognition. Drawing extensively on new research from animal charities, state archives, diaries, and family stories, Kean does more than tell a virtually forgotten story. She complicates our understanding of World War II as a "good war" fought by a nation of "good" people.

Accessibly written and generously illustrated, Kean's account of this forgotten aspect of British history moves animals to center stage-forcing us to rethink our assumptions about ourselves and the animals with whom we share our homes.