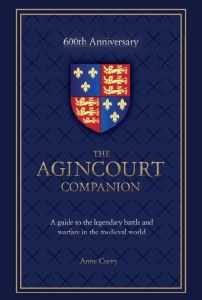 The Battle of Agincourt on 25 October, 1415, remains one of the most glorious victories in British history, with a legacy that endures today. A pivotal moment in the Hundred Years War between France and England, it reinvigorated the English campaign in France and bolstered the English crown's hereditary claims to French land. Published to mark the 600th anniversary of this famous victory, The Agincourt Companion presents the captivating story of the battle; how Henry V led an outnumbered army to glory, the skill of the archers, and the core military tactics that proved so successful for the English army.

Moreover it tells a wider story about warfare in the middle ages. Delving into the development and advances in weaponry, armour and tactics during this period and the impact this had on the battlefield, this is a richly detailed look at the world of medieval warfare.