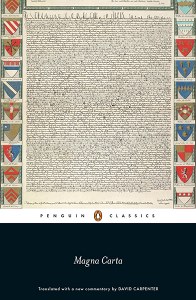 Magna Carta : With a new Commentary by David Carpenter

With a new commentary by David Carpenter "No free man shall be seized or imprisoned, or stripped of his rights or possessions, or outlawed or exiled, or deprived of his standing in any other way, nor will we proceed with force against him, or send others to do so, except by the lawful judgment of his equals or by the law of the land." Magna Carta is probably the most famous declaration in western legal history. Wrested by rebellious barons from a very reluctant King John, it set out a series of rights and duties which have been appealed to, ignored, suppressed and argued about ever since. 2015 is the 800th anniversary of Magna Carta's creation - an event which will be marked with exhibitions, commemorations and debates in all the countries over whose constitutions and legal assumptions the shadow of Magna Carta hangs.