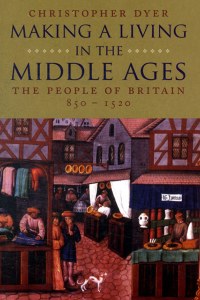 Making a Living in the Middle Ages

Dramatic social and economic change during the middle ages altered the lives of the people of Britain in far-reaching ways, from the structure of their families to the ways they made their livings. In this masterly book, preeminent medieval historian Christopher Dyer presents a fresh view of the British economy from the ninth to the sixteenth century and a vivid new account of medieval life. He begins his volume with the formation of towns and villages in the ninth and tenth centuries and ends with the inflation, population rise, and colonial expansion of the sixteenth century.

This is a book about ideas and attitudes as well as the material world, and Dyer shows how people regarded the economy and responded to economic change. He examines the growth of towns, the clearing of lands, the Great Famine, the Black Death, and the upheavals of the fifteenth century through the eyes of those who experienced them. He also explores the dilemmas and decisions of those who were making a living in a changing world-from peasants, artisans, and wage earners to barons and monks.

Drawing on archaeological and landscape evidence along with more conventional archives and records, the author offers here an engaging survey of British medieval economic history unrivaled in breadth and clarity.