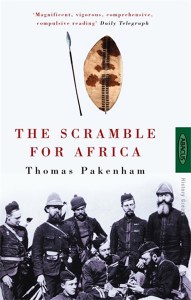 In 1880 the continent of Africa was largely unexplored by Europeans. Less than thirty years later, only Liberia and Ethiopia remained unconquered by them. The rest - 10 million square miles with 110 million bewildered new subjects - had been carved up by five European powers (and one extraordinary individual) in the name of Commerce, Christianity, 'Civilization' and Conquest.

The Scramble for Africa is the first full-scale study of that extraordinary episode in history.