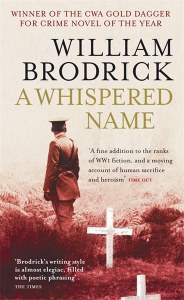 To keep quiet about something so important ...well, it's almost a lie, wouldn't you say?' When Father Anselm meets Kate Seymour in the cemetery at Larkwood, he is dismayed to hear her allegation. Herbert Moore had been one of the founding fathers of the Priory, revered by all who met him, a man who'd shaped Anselm's own vocation. The idea that someone could look on his grave and speak of a lie is inconceivable.

But Anselm soon learns that Herbert did indeed have secrets in his past that he kept hidden all his life. In 1917, during the terrible slaughter of the Passchendaele campaign, a soldier faced a court martial for desertion. Herbert, charged with a responsibility that would change the course of his life, sat upon the panel that judged him.

In coming to understand the court martial, Anselm discovers its true significance: a secret victory that transformed the young Captain Moore and shone a light upon the horror of war.

Beautifully written, think of this as Chesterton's Father Brown meets Wilfred Owen. Investigating the past of one of the priory's founding fathers sees Father Anselm delving into the harrowing decisions made by Field Court Martials during the First World War. Sally Hughes Assistant Retail Manager