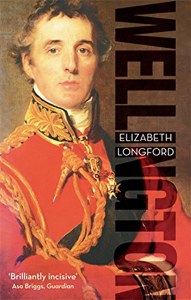 The archetype of the stern, silent Englishman dedicated to his duty, the Duke of Wellington had all the subtlety and variety of genius. WELLINGTON uncovers the sensitive child of Irish aristocrats pushed into the army, making his name in India before returning to lead the Allied Armies to victory against Napoleon in the Peninsular War and at Waterloo. Swapping battlegrounds for political minefields, Wellington emerges as a conservative Tory Prime Minister of a country demanding every variety of reform.

Many strands gradually come together in his character, to make at last the ideal he had always held out for himself; 'the retained servant of king and people'. WELLINGTON triumphantly succeeds in revealing an unforgettable, appealing and very human character. Magisterial, vivid, exhaustively researched, sympathetic yet balanced, rich in personal details but scholarly too.

Elizabeth Longford's classic biography was greeted with a storm of acclaim.