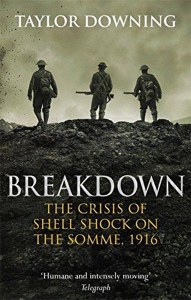 Breakdown : The Crisis of Shellshock on the Somme

Inability to stand or walk. Temporary blindness or deafness. When strange symptoms like these began appearing in men at Casualty Clearing Stations in 1915, a debate began in army and medical circles as to what it was, what had caused it and what could be done to cure it.

But the numbers were never large. Then in July 1916 with the start of the Somme battle the incidence of shell shock rocketed. The high command of the British army began to panic.

Re-assessing the official casualty figures, Taylor Downing for the first time comes up with an accurate estimate of the total numbers who were taken out of action by psychological wounds. It is a shocking figure. Taylor Downing's revelatory new book follows units and individuals from signing up to the Pals Battalions of 1914, through to the horrors of their experiences on the Somme which led to the shell shock that, unrelated to weakness or cowardice, left the men unable to continue fighting.