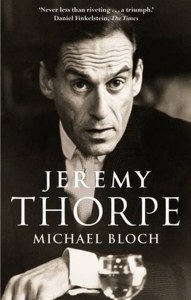 The story of Jeremy Thorpe's rapid rise and spectacular fall from grace is one of the most remarkable in British politics. When he became leader of the Liberal Party in 1967 at the age of just thirty-seven, he seemed destined for truly great things. But as his star steadily rose so his nemesis drew ever nearer: a time-bomb in the form of Norman Scott, a homosexual wastrel and sometime male model with whom Jeremy had formed an ill-advised relationship in the early 1960s.

Michael Bloch's magisterial biography is not just a brilliant retelling of this amazing story; ten years in the making, it is also the definitive character study of one of the most fascinating figures in post-war British politics.